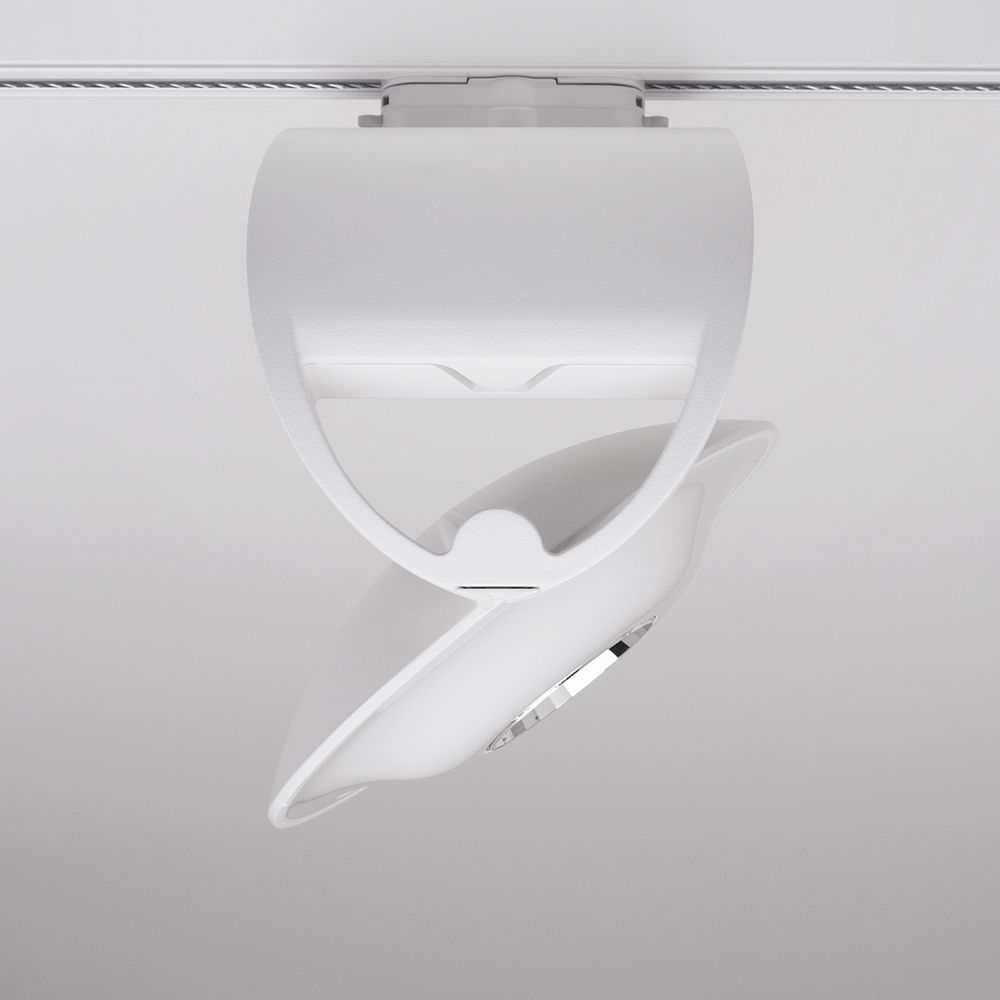 This die cast aluminum powerful spotlight complies with the technical specifications required by the last generation of COB LED (9100lm/74W), combined with high esthetic features: the gear box is shaped to follow the elliptic design of the dissipating head for a compact visual effect. This results in a brilliant integration between the two elements, with the center of gravity focused on their point of junction to ensure a perfect balance of weights. The gear box is emptied near the point of junction, to lighten its profile and to make the pivoting head visible from different positions.

Bio Professor of Architecture and Industrial Design at the University of Architecture in Genoa, Enrico D. Bona taught in many International Instituted (including ILAUD) and was editor-in-chief of the magazine Casabella. Owner of EDB STUDIO (Milan, Genoa and Paris), in over forty years (the last twelve with Elisa Nobile), he worked at the most complex issues on a very variable scale (from big constructions such as universities and hospitals to design products).
For industrial design E.Bona and E.Nobile collaborates with important Italian brands and received awards and mentions in Italy and abroad.

Other prizes Some of the LED lamps and lighting systems designed by Enrico Bona and Elisa Nobile, for the lighting company Ivela S.p.A., have been selected by the German Design Award (Special Mention), by the Permanent Observatory of Design in Milan and published in the ADI Design Index. In 2018 they won the 3rd Prize for the interior design of the Lecce prison cell (competition "SIX SQUARE METERS_Persone, luoghi, dignità") and, with their glass design product, they are finalists at the international competition "Venezia Arte Laguna 2019." Enrico Bona also received the San Carlo Borromeo award for his whole career while Elisa Nobile received in 2008 a Special Mention at the Triennale in Milan for a sustainable kindergarten project; in 2011 she awarded with the 3rd Prize for Contemporary Architecture, at Maxxi Museum in Rome, for the "New Community Center Paideia for Children" realized with G. Piovaccari; in 2010 she has also been selected to exhibit furniture design projects for EDB STUDIO at the Salone Satellite, a notable space for young designers held during Milan’s International Furniture Fair.