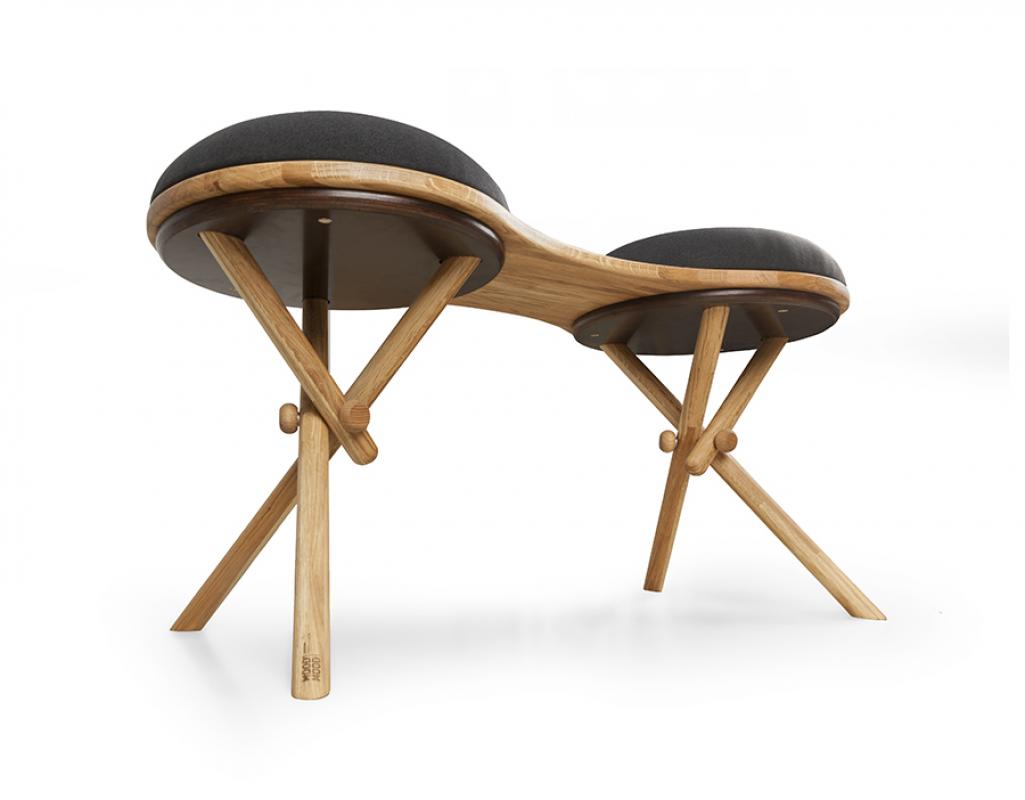 The Puff Bench is made of laminated oak and
is protected with organic oil. The sitting
part is made of wood and it is two linked
circular in shape. Upholstery of various
colors in placed on the wooden part, which
gives the bench excellent comfort. The
dimensions of the bench is 400 x 1000 mm and
height is 500mm. The supports are connected
with screws and by removing them, the bench
becomes completely dis mountable.

Bio Milica Maric was born on April 1, 1986, in Cacak. After graduating from high school (department of natural sciences and mathematics) in her hometown, in 2005 she continued her education in Belgrade, on Faculty of Applied Arts, Department of Interior Architecture. In 2010 she graduated from undergraduate studies and got her Master degree on the same Faculty, with average mark being 9.53/10.

Other prizes In 2011 Milica received an award in competition ''Let's renew Serbian Wood Industry'', organized by NAF under the patronage of Serbian Government. Works were realised by Company SIMPO in 2012 and they were exhibited in Post Galery on April and May 2012.In 2012 at 50th Furniture Fair in Belgrade, Milica received an award for EXCEPTIONAL AESTHETIC SOLUTIONS - DESIGN SHOWPIECE,for the WOOD MOOD DESIGN product line.In May 2013, 2014, 2015, 2016 I 2017 Milica’s WMD line of product were in the Ghost Project 2013. International Furniture Competition which is announced by MIKSER organization.In June 2013, 2014, 2015 Milica’s works were in 100% Future Serbia, Furniture Competition which is announced by Belgrade Design Week / BDW organizations.In 2014, 2015, 2016 at ''Month of Design Ljubljana'' , in Slovenia, Milica represented her line of product, lamps, tables, chairs and bench. ''Month of Design'' in Slovenia is a manifestation of design, highly valued in the region where exhibitors from different sphere of industrial design represent their work.In 2016 Lamp The Clip is Winner A' Design Award in Lighting Product and Lighting Projects Design Category, 2015-2016., Como, Italy.In 2017 Lamp CUP 2016 and Puff Bench got the European Product Design Award in the category of light and furniture for 2016-2017, April, Brussels, Belgium.In 2017 Puff Bench, got the A 'Design Award in the category of furniture and decorative items for the interior, for 2016-2017, April, Como, Italy.In 2017 lamp CUP611 I WM2 club table, got the International Design Award in the category of lights and furniture, for 2016-2017, May, Los Angeles, USA.In 2019 lamps O, got the International Design Award in the category of lights, for 2018-2019, March, Los Angeles, USA.